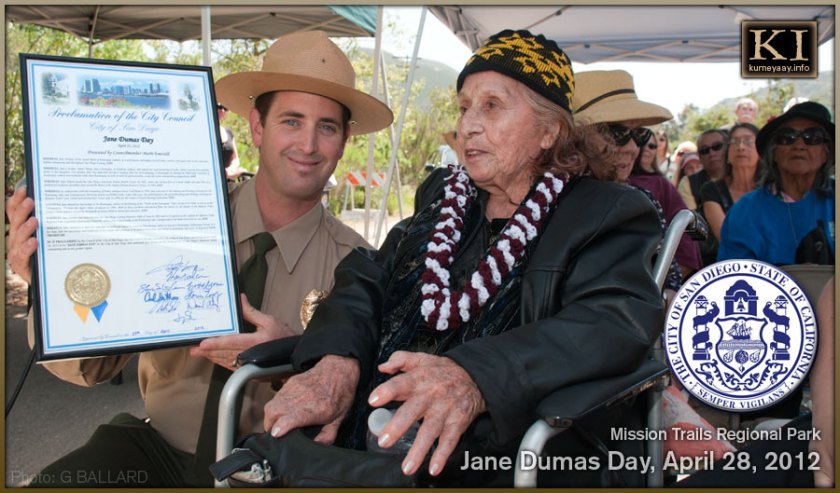 Jane Dumas is a respected Kumeyaay elder who was honored on April 28th by having a day named after her at Mission Trails Regional Park.  Kumeyaay is Jane’s first language and she remains one of the last living fluent speakers of the Kumeyaay language in the world.  And she has spent the last 60 years of her life educating people about Kumeyaay history and culture.

After I came across this heart-warming story about Jane Dumas Day, and learned about all she has done in support of Mission Trails Regional Park, I wondered if she had been apprised of the fact that Cogentrix and Sempra Energy are trying to ruin Mission Trails by placing their unsightly, noisy power plant right next to the Equestrian Center, just north of Kumeyaay Lake.

What I have appreciated about various tribes, after having studied their history for the last 45 years of my life, and contributing to various American Indian charities, is that their spirituality is rooted in Nature.  Does anyone remember the commercial featuring an Indian man weeping at the sight of pollution in the river?  I am afraid that Jane Dumas will have a reaction very similar to that, when someone informs her of what is happening now, just a few months after the day she was honored at her beloved park.

“. . . WHEREAS, Jane Dumas was inducted into the San Diego County Women’s Hall of Fame in 2002 and is recognized as the catalyst for Mission Trails Regional Park acquiring a Kumeyaay-Diegueño Nation flag to fly proudly at the Kumeyaay Lake and Campground in her honor from here on out; AND

WHEREAS, Jane continues to share her expertise in medicinal plants by teaching Ethnobotany classes at Sycuan’s Kumeyaay Community College.  It is her hope that the knowledge and traditions of her people will continue to be passed down from generation to generation and never be forgotten; NOW THEREFORE. . . “

. . . Jane Dumas we need you to stand with us now as we struggle to save Mission Trails Regional Park.

One thought on “Does Jane Dumas Know Cogentrix is Trying to Ruin Mission Trails?”